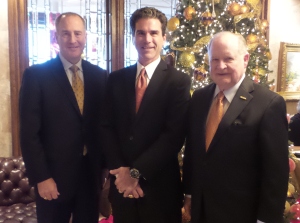 Dallas/Fort Worth International Airport is a $31 billion annual economic engine for the DFW region, accounting for nearly 10 percent of the North Texas GDP while employing 150,000 people on a $9 billion payroll. The third-busiest and highest-capacity airport in the world, DFW International Airport hosted 63 million travelers last year.

For our Q3 2014 Spotlight SeriesSM breakfast, we invited Sean Donohue, chief executive officer of DFW International Airport, to explain this major international hub’s impact on the North Texas economy, as well as ongoing airport improvements that will benefit our area in the future.

Mr. Donohue joined DFW International Airport in October 2013 after a distinguished, 28-year career in the airline industry. He manages an organization comprised of more than 1,700 employees, as well as an annual operating budget of over $650 million and a $3 billion capital improvement program.

While safe and reliable operation is the airport’s No. 1 priority, DFW Airport is aggressively investing in infrastructure development to keep pace with major international airports such as Shanghai, Doha and Abu Dhabi.

These and other improvements are paid for with revenues from non-aeronautical income, such as parking, concessions and commercial development on DFW Airport’s 17,000 acres.

International travel generates hundreds of millions of dollars each year for the North Texas region, with international visitors typically spending $2,000 to $3,000 in the DFW area. The airport is working to attract more international airlines seeking the best return on their investment in costly international airplanes, such as the A380. In the last four years, the number of international destinations at DFW has grown from 37 to 55, while Atlanta’s international capability has shrunk by 20 percent.

From 2013 through 2018, the airport is investing $50 million in non-aeronautical revenue to incentivize international carriers to come to DFW. With China’s economic success feeding extensive travel and tourism, attracting Chinese travelers is a high priority for DFW Airport, which will begin new service to Beijing in April 2015.

DFW Airport has historically been rated the top airport in the United States for customer service, and is now benchmarking against world-class airports such as Singapore and Dubai.

A customer segmentation study this year revealed the preferences of international travelers from various nations, allowing the airport to customize terminal areas based on flight origin. The airport has also cut the international arrival process by 50 percent with technology, such as kiosks where U.S. citizens can swipe their passports and skip customs if they have no checked bags.

Next summer, DFW Airport’s Terminal D will open North America’s finest travel lounge for first-class and business-class customers. New signage is also in development to help customers navigate the airport and find their way into the cities.

By investing in its international service capabilities, facilities and technology, DFW Airport is increasing its domestic competitiveness and raising the bar for international airports around the globe.

Save the date for our next Spotlight SeriesSM breakfast event scheduled for March 10. Look for details and invitations in February. Did you miss one of our Spotlight Series events? Check out summaries of past events.

White Paper:
Why Gen Xers Are Critical to Your Succession Plan