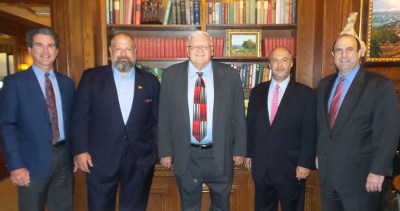 Many issues are contributing to a general sense of uncertainty in both business and daily life, but three interrelated issues are weighing particularly heavily on the minds of business leaders: the upcoming presidential election, Brexit and terrorism. In Pearson Partners’ Q3 2016 Spotlight SeriesSM breakfast discussion, we delved into each of these factors and the risks they represent. Our esteemed panelists included:

Below is a summary of our panelists’ comments.

According to our panelists, many in the investment community expect Hillary Clinton to win in November, with Republicans retaining at least one house of Congress. If Clinton wins, Democrats have a good chance of taking over the Senate, as the party only needs to flip four seats to achieve a majority. If Trump wins, it’s likely Republicans will retain Senate control.

However, Republicans are likely to hold onto the House of Representatives, regardless of who wins the Oval Office, as the party currently holds a 30-seat majority. According to the Cook Political Report, only 31 of the current GOP House seats are competitive races, so to achieve a majority, Democrats would need to flip 30 of them while retaining their current seats.

Such a divided Congress would likely result in a continuation of the current gridlock. Although such inaction is dysfunctional, financial markets have prospered in such a state since 2011.

The policy implications of the election are enormous, with one of the biggest issues at stake being fiscal policy. Regardless of who wins the presidency, we could see a Federal Reserve that passes the stimulus baton to politicians. We could see a more activist tax and spending policy, which could result in rising budget deficits, after watching them decline for the last six years.

On trade policy, globalization and trade deals have resulted in a growing global economy over the last quarter century, which has been a boon to the financial markets. A turn away from trade deals—as proposed by Trump—could have a negative impact on market valuations over the next five years.

Another hot-button issue is regulation, with the majority of cases in front of the Supreme Court dealing with economic and business issues. The next president will appoint at least one Supreme Court justice, so he or she will have a big impact on the business operating environment for decades to come. Other issues that are likely to have a big impact on business are the candidates’ differing positions on tax policy, immigration and foreign policy—particularly our country’s relationships with Russia, North Korea, China and Iran.

The industries most likely to feel the impact of these policy differences and the election’s outcome are healthcare, financials and energy.

The financial markets have not reacted to recent terrorist attacks, which have, sadly, become part of the global landscape. The markets’ resilience in the face of terrorist activity is an enormous negative for terrorists.

With a financial system that is now largely digital, the gravest threat to the financial markets is cyber terrorism. Such an attack could cause tremendous, confidence-shaking, systemic impact and represents significant risk. Companies, individuals and organizations must take personal responsibility for ensuring their own cyber resilience.

Because reducing poverty is one way to combat terrorism, America’s business leaders have a key role to play in the global fight against terror. By helping to stabilize the global economy and penetrate emerging markets, good businesses can push bad businesses out of the market and contribute to sustainable, stable, resilient communities.

The United Kingdom’s exit from the European Union has tremendous implications for all of Europe, and the ripple effect will be felt all over the world for years to come.

While the United States was able to recover almost completely from the Great Recession in just two years, looking from about 2008 forward, Europe took eight and a half years to recover from the recession. This lack of economic growth in Europe—coupled with the refugee crisis—led to the Brexit.

Across Europe, we can expect political test after political test regarding other countries’ willingness to stay in the EU. Italy will soon vote on an amendment to their constitution that will be a referendum on support for the prime minister, while the opposition party seeks an immediate vote on the country’s EU membership. The Netherlands and France both vote next spring, with their respective EU-skeptic, anti-immigrant parties currently leading in the polls. Germany will hold an election by next October, with Angela Merkel’s popularity currently sinking. The outcome of these elections could create a political power vacuum in Europe.

It will take years for the UK and the rest of Europe to sort out their ongoing economic and business relationships, which will ultimately impact American business as well.

Some answers will come in November, but the full impact of the election, Brexit and the ongoing terrorism threat on the economy, financial markets and our daily lives will only be understood with time. Meanwhile, business leaders must strive to evaluate all possible scenarios to be prepared for whatever may come.

Tips From the Leadership Coach:
Leading in the Face of Uncertainty

Global Survey:
The Rise of the Chief Digital Officer