Pearson Partners believes in giving back to the community, and we encourage our team members to be involved in charitable and civic organizations. Deborah Sawyer, our vice president, serves on the board of directors and chairs the nominating committee for Tech Titans (formerly called Metroplex Technology Business Council). In our Q2 2014 Searchlight newsletter, we spoke with Deborah about her passion for the organization. We sat down with her again this year to get an update on the organization and its 2015 Tech Titans awards. 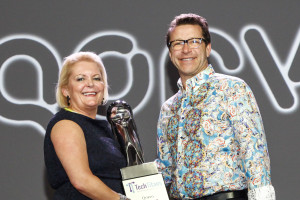 What are the Tech Titans awards?

The Tech Titans awards recognize outstanding Dallas/Fort Worth area technology companies and individuals who have made significant contributions to their industries during the past year. In the words of my colleague, Bill Sproull, president and CEO of Tech Titans, the awards are the premier recognition of innovative technology companies and individuals who contribute to the vibrancy and success of North Texas.

How did you become involved in the organization, and how does it enrich your professional career?

One of Pearson Partners’ advisory board members, Dr. Bob Potter, introduced me several years ago to Tech Titans’ CEO Bill Sproull. I started attending their Tech Industry luncheons, and in subsequent meetings with Bill and his team, I became fascinated by the organization and its mission. I have chaired the Tech Titans nominating committee the last two years, and was elected to the board in 2015. It helps me and Pearson Partners to further our involvement in the fast-growing technology community in the Dallas metroplex.

How have you seen the organization and the awards program grow?

This year was the 15th anniversary of the Tech Titans awards. We had the most nominations this year that we’ve had in the history of the awards. We also had the highest-quality group of nominees yet. I salute my fellow committee members for the tough job it was all year to narrow the exceptionally qualified field of nominees to finalists and then award winners. Even the judges remarked that the quality of the nominations this year was outstanding.

At the annual awards gala on August 21, we announced a new name for the organization, formerly known as Metroplex Technology Business Council (and a mouthful!). Our new name, Tech Titans, reflects the mission of the organization in being the largest innovation hub and technology trade organization in Texas. We have grown from 80 members in 1994 to representing over a quarter of a million employees in 300 member companies today.

The organization hosts a separate set of awards called Fast Tech. How do those awards differ from Tech Titans?

Several years ago, we celebrated companies that had grown in the triple-digits. Today we have many who have grown 1000, 2000, even 4000 times in two years. It really speaks to the hotbed of technology investment in North Texas. The Fast Tech honorees are in the spotlight, and that is often an indicator of impending successful exit. In fact, Fast Tech is often viewed as an incubator for the Tech Titans “Emerging Growth” award category. We’ve frequently had companies go from Fast Tech to Emerging Growth and up to Corporate over just five years or so.

Where can we find information on the nominees and winners?

You can learn more about the Tech Titans and Fast Tech award nominees, finalists and winners—as well as how you can become involved and even nominate yourself, a client, your boss or your company—on the Tech Titans website.

Tips from the Leadership Coach:
How Does Your Organization Cope with Uncertainty?

Pearson in the Community:
Tech Titans