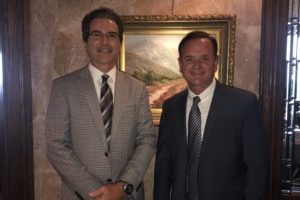 Business is booming in North Texas, and the City of Richardson is no exception. Located just north of Dallas, the thriving community boasts an ideal mixture of small-town community and big-city business. The city’s unique vibe—combined with its strategy to attract and retain successful businesses—has made Richardson a hot North Texas job center.

At our Spotlight SeriesSM breakfast on June 19, we welcomed Don Magner, First Assistant City Manager of the City of Richardson, to share how Richardson’s leaders are connecting with the community and using a successful Economic Development Partnership to attract new investment and jobs.

As a city that thrives on startup businesses and entrepreneurship, Richardson takes an aggressive approach to economic development, employing creative strategies to recruit and retain business in the thriving North Texas city.

Relying on a city manager form of government, backed by a diverse group of elected city council members, Richardson also has a unique Economic Development Partnership that is a joint venture between the City of Richardson and the Richardson Chamber of Commerce. This quasi-economic development corporation is funded by contributions from members, as well as city tax dollars, and employs licensed real estate brokers to support existing and emerging businesses.

Richardson’s current population of 107,000 reflects an increase of about 23,000 over the last 17 years. The 30-square-mile telecom corridor boasts about 1,000 employees per square mile—more than any other major job center in the Dallas/Fort Worth area. With 30 million square feet of Class A office and flex space, the city is rapidly growing and is focused on redevelopment, as 97 percent of the city is already developed. Richardson is one of just eight Texas cities with a AAA bond rating by both Moody’s and Standard & Poor’s, allowing the city to borrow money at a substantial discount.

For every 1.5 acres, Richardson has about $1 billion in valuation. The median home value is following the upward trend seen across North Texas in the past few years, with appraised values increasing 25 percent over the last three years. Fully 97 percent of homes in Richardson are represented by some type of neighborhood association, enabling close relationships between citizens and city government that have created an informed, engaged community.

To compete for business with 4a/4b cities (that collect additional sales taxes for economic development), Richardson gets creative, offering land, tax abatements or rebates with a gainshare rationale, in which new businesses earn back part of the revenue they bring to the city.

Richardson is also well known as a STEAM education hub, which appeals to technology businesses seeking talent. Almost 59 percent of Richardson residents have a bachelor’s degree or higher, and about 91 percent of residents have a high school degree. Roughly 20,000 students attend The University of Texas at Dallas, which has the nation’s fourth-largest computer science program and second-highest number of graduates earning master’s degrees in computer science. Richland College also boasts a Texas-Instruments-supported, two-year associate’s degree in semiconductor manufacturing.

Further boosting Richardson’s business prospects is the Cotton Belt Rail, otherwise known as the Trinity Rail Express. By 2023, this 62-mile rail line will connect downtown Fort Worth to DFW Airport Terminal B to Plano, with stops at UT Dallas and city line stations in Richardson. Visitors will be able to fly into DFW and arrive in Richardson in just 20 minutes, opening up greater opportunity for international business and education in North Texas.

Save the date for our next Spotlight SeriesSM breakfast scheduled for September 11, where we will have Dr. Richard C. Benson, president of The University of Texas at Dallas, talk to us about the big impact UTD is making on the future of North Texas. Did you miss one of our Spotlight SeriesSM events? Check out summaries of past events.

White Paper:
The Chief Talent Officer: The Rising Star in the War for Talent