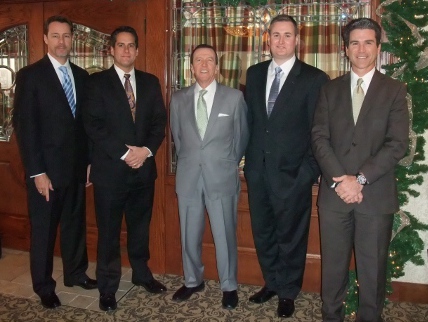 As we begin to see light at the end of the economic tunnel, we are emerging into a world where the rules have changed. Where we once could anticipate the impact of taxes, interest rates, and to some extent, inflation, we are now venturing into territory uncharted by the current generation of investors. Navigating this new economic environment, both personally and professionally, calls for new strategies based on sound research.

At our Q4 2013 Spotlight SeriesSM breakfast forum, Greg Young, senior portfolio manager with Bernstein Global Wealth Management, led our annual forward-looking economic discussion of current economic and stock market conditions as well as what’s ahead for 2014 and beyond.

We’ve been fortunate for the past 30 years to have had steadily declining interest rates and reasonably robust returns in the stock market. Going forward, investors are adjusting their expectations, as 4–5 percent returns in the market seem to be the new normal. Today’s near-record-low interest rates almost certainly have nowhere to go but up. U.S. inflation will remain relatively contained at 2 percent, and it will take five or six years to return to 5.5–6 percent unemployment. The federal funds rate will gradually ease closer to 4 percent, signifying about 6 percent yield on the 10-year treasury.

Looking ahead, when you compare the fourth-quarter expected GDP growth this year to the fourth quarter of last year, there is growth in almost every part of the world except Japan. Europe is finally starting to slowly emerge from recession, and the United States just had a 3.6 percent preliminary reading on third-quarter GDP and is likely to hit about 3.5 percent next year. Globally, we seem to be on track for about 3 percent growth, which is good enough to generate job growth and spark an increase in interest rates.

Optimism is growing in the United States, in part due to growth in cyclical sectors such as housing, which has finally turned a corner. This will bring the beneficial impact of rising home values, as well as increases in investors’ net worth and confidence. Likewise, consumers are spending, and manufacturers are lowering costs and producing more, with healthier balance sheets.

Municipal bond yields are projected to be somewhere above 2 percent for the near future. While rising interest rates influence price, higher yield, higher income and benefits of rollover in the next few years will create a positive return. Despite headline news about state pension problems, the default rate on municipals is actually quite low, and is expected to remain so in the near future. The movement away from equities and into bonds has begun to reverse as it’s become evident that higher interest rates do not necessarily mean bad news for stock returns.

Because people have focused on investing in “safe”, high-dividend stocks in recent years, those have become a crowded trade, inflating these stocks’ valuation. However, these stocks are vulnerable because they begin to lose value once interest rates increase.

The traditional formula that the older you get, the more you should allocate to bonds, doesn’t apply right now. The old “safe” ratio of 30 percent equities to 70 percent bonds has really flipped recently to suggest the opposite. We’re in uncharted waters with central bank policy, and while it’s unlikely that inflation is right around the corner, investors should be observant since historically when inflation hits, it hits unexpectedly and suddenly. It’s important to have some inflation-sensitive assets or commodities exposure to lessen the potential impact on investment portfolios.

Are we due for a stock market correction? While that’s hard to predict, there’s not a case to be made that stocks are overvalued, and stock valuation matters more than price. Relative to bonds, stocks are still quite attractive, and will be for some time. Just a couple of years ago, when the Dow was around 11,000, it was hard to imagine it hitting 20,000. Today, as it nears 16,000, that trajectory doesn’t seem as much of a stretch. Our takeaway? With a few adjusted expectations for the new normal, the stock market continues to offer a sound long-term investment opportunity. With interest rates still near all-time lows, stocks in general remain extremely attractive relative to bonds, as long as investors have a strategic risk-management strategy in place.

Tips from the Leadership Coach:
Control Change or Be Controlled

Pearson in the Community: March of Dimes